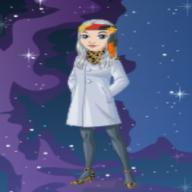 Hi, I was formerly Armchair Goddess up to level 7, but abruptly and without explanation got "suspended" (currently under appeal). I am a poet and an artist, metaphysical in my approach to religion, and I love engaging in verbal swordplay. I don't report people unless they threaten violence to our democratically elected president, and I do not mind dissent at all---I was raised in a family of rugged individualists who loved debate. The "Armchair Goddess" persona is a take on the Miss Marple (of mystery fame) way of solving mysteries.