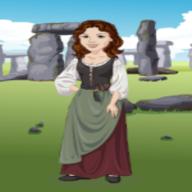 I am a blindness rehabilitation assistant living in Texas. I write fantasy and would like to publish books someday. I am extremely interested in issues of religion. I am a Judeo-Christian deist who was raised Catholic. I also explored Bahai'ism and Wicca during my college years and early thirties. In the cult of the Flying Spaghetti Monster, I am the self-proclaimed chronicler of the Blessed Saints Alfredo and Marinara, Asiago be upon them! Note: I give thumbs-down for excessively long, cut and pasted answers. I also give thumbs-down for all-caps answers.