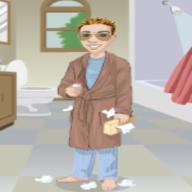 I am a 62 year old retiree who loves animals and cooking. I bake bread from scratch, and love experimenting with new recipes. Our family dog is a Pomeranian we found abandoned. My wife and I have three children.